From Mutton to Masterchef 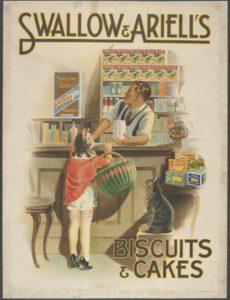 Jan O’Connell was our guest speaker at the Annual General Meeting on October 21st. Jan’s background in copywriting and advertising has lead to a lifelong fascination with the people and the companies associated with the food industry. Her first book, Me & My Big Mouth is to be followed shortly by a new book called A Timeline of Australian Food: From Mutton to Masterchef  She also hosts a website entitled A Timeline of Australian Food.

Jan introduced the audience to eleven influential people associated with food in Australia since colonial times; as Jan called them, “Australian Food Heroes”. These included Edward Abbott who wrote the first Australian cookbook in 1864, the ‘Rowland Catering’ of their day Messrs. Spiers and Pond and of course, a local Hawthorn favourite Joseph Fowler who brought us Fowler’s Vacola.

This was a truly fascinating talk. Jan has put the substance of the talk as well as her overheads on her website, so if you missed it you can see it for the first time or you can live it all over again. This is the link to the material: http://meandmybigmouth.com.au/australias-food-heroes/