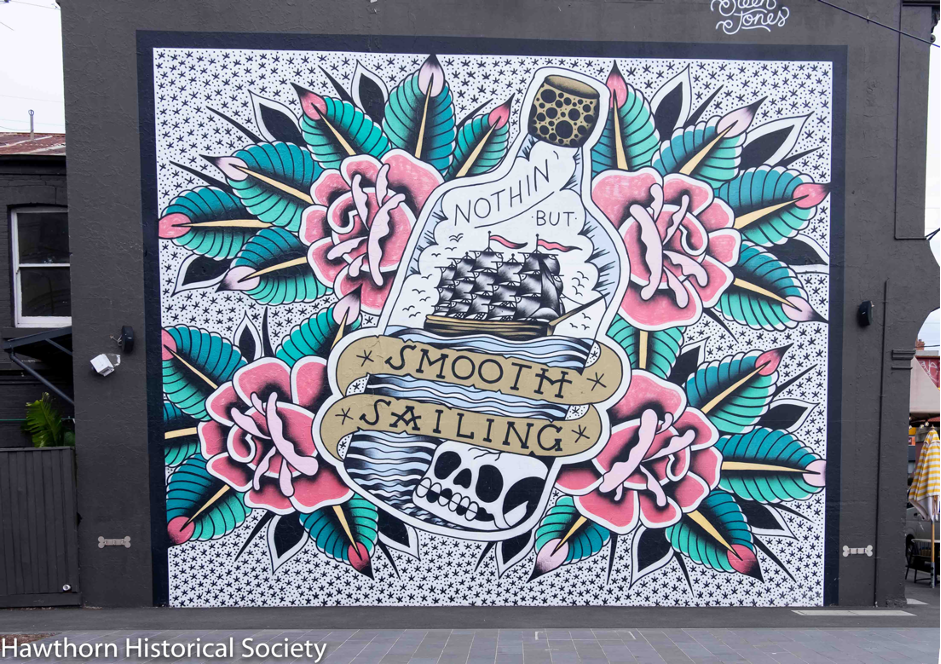 The Auburn Village with its iconic heritage buildings, many designed by John Beswicke, architect of the Hawthorn Town Hall, over a hundred years ago, may seem an unlikely place to discover fine street art. However, the Village is certainly embracing the trend of commissioning pieces of art to grace the walls of some of our older historic buildings around Hawthorn.

The first to catch the eye in this shopping precinct, is the iconic style of Steen Jones. Nothing But Smooth Sailing located on the corner of Victoria Road and Auburn Roads. The popular Hello Sailor café has occupied the building at 89 Auburn Road since 2014, but like most of the buildings in this historic location it has also served in other capacities. For example, it was once George F. Carter, grocer, who from this same address in 1905 and for the next nearly thirty years, was also supplying the local residents with their essential food requirements.

Steen, the creator of the mural, describes himself as an artist, dreamer, adventurer and achiever. He was commissioned by Nicholas Doyle the owner of Hello Sailor to complete this work in 2016. Fortunately, the café staff were on hand with a ready supply of good food and coffee as the artist worked during a particularly bleak Melbourne winter. Steen says that the majority of his work is heavily inspired and derived from traditional tattooing style and this artwork certainly reflects this, whilst also picking up, not just on the café‘s catchy name, but on the owner’s recent ten-year stint in the Navy his Irish forebear ‘Paddy’ Doyle, who in 1942 jumped ship in Australia. Steen Jones has created a distinctive and memorable piece of art that brings a smile to the face of all those passing by. For some insight into the inspiration for his work and to see further images of the work in the making, see: https://www.youtube.com/watch?v=Svg92hldPps

There is another fine mural in the Auburn Village which gets loads of passing foot traffic. This nature-inspired mural animates the pedestrian walkway off Auburn Road to access the Auburn Railway station. The mural was commissioned by the Auburn Village Traders in collaboration with the City of Boroondara and was funded by a Graffiti Prevention Grant from the Department of Crime Prevention. The City of Boroondara has recently embraced street art in numerous areas particularly under the railway bridges across the city. These lively murals apply motifs which reflect the character of the specific areas and council hope they will revitalize shopping centres, enliven the streetscape and discourage the random defacement of buildings. Hence the council was involved with drawing up the artist’s brief and contract, as well as overseeing the important selection process. The launch of the mural on May 7th 2019 was attended by the artist, local traders and various dignitaries including the Minister for Crime Prevention: The Hon, Ben Carroll MP. and then mayor of the City of Boroondara, Jane Addis.

The vivid mural was created by talented Melbourne based artist, Makatron, who paints in a variety of media, mainly on walls, canvas and also illustration on paper. Mike Makatron has studied art in New York and his pieces have been exhibited across the world, with works held by the National Gallery of Australia, the National Gallery of Victoria and MONA, Tasmania. Many of you will have seen his 83 sq metre mural which graces the walls of the Melbourne’s Sea Life Aquarium and depicts the enchanting underwater world of jellyfish. This work too, at 111A Auburn Road, encourages us to engage and appreciate the natural world around us and is a welcome addition to an area that could easily have become an unsavoury thoroughfare. http://www.makatron.com/

Whilst there may have been a flurry of street art in the suburb in recent years, a number of smaller pieces have been around for some time. One of the first pieces I noticed around Hawthorn was the Einstein portrait on the south east corner of Clive and Riversdale Road Hawthorn. In 2014, Vincent Maloney took two days to create this fitting image of the inspired physicist, Albert Einstein for Inspired Workforce Performers who currently occupy the building. Vincent on his website describes himself as a person who likes to create artwork, films and cartoons.

This building probably started life just after the turn of the century and was occupied by Brown and Co, Estate Agents in 1915, before a succession of confectioners, from A. Phillippe in 1920, Mrs G. James (1931) B. & E Hearn (1955) and Mr R. Blumsztein in 1966, made good use of this prominent location. Confectioners were hugely popular, with many advertising that they sold a variety of English and Continental lollies but also offered patrons afternoon tea, pies and ice-cream. In a sense the confectioners might be called the precursors of the milk bar.

In more recent years, this address was indeed the local milk bar and residence for the family who operated it. Gradually however, unable to compete with the easy convenience of the larger supermarkets, the corner milk bar, has now become a vanishing institution, around the Melbourne suburbs.

For most members of the older generations, however, these corner shops still evoke fond childhood memories, of ordering school lunches, of spending one’s pocket money on a bag of mixed lollies and the occasional ice-cream, or being sent to the shop for the milk and the newspaper.

On the other hand, it was a tough life for the operators, many from immigrant communities, who worked long hours ‘behind the counter’ in the hope of a better life for their families. Fragments of this building’s earlier life are still in evidence today, as the exterior displays several ghost sign advertisements from that earlier era.

A little further away, another small but engaging piece can be found as commuters emerge from the heritage listed Hawthorn train station and walk to face Burwood Road. Hopefully you won’t miss the Aussie Digger in his slouch hat looking out from the side wall of this tiny shop, Hawthorn Cobblers, operated by Ben Folland at 44 Burwood Road It was however his predecessor Marc Jensen, a former member of the defence force and then proprietor of the tiny boot repair business, who requested the work from the artist Andrew Silver.

Interestingly this tiny triangular shaped allotment at 55 Burwood Road was created when the trainline from Hawthorn was extended through to Glenferrie Road in 1882. It cut through Village Lots 1 and 2 belonging to Charles Baker, who in the 1884 owned seven shops or houses in this section to Elgin Street as well as living behind in a new house in Lennox Street.  Charles was a house painter as well as a wine-seller and was elected to the Hawthorn Council from 1869-1884, serving as mayor in 1872/3.

Whilst this little shop may have started life as a one room house around 1892, by 1901 and for the next thirty years it was the house and land agent’s office, of Henry D Westley and then Donald McMillan, with a bootmaker James Grant operating next door. By 1942 however, Grant was gone and A. Leslie, bootmaker had set up shop here instead. And for many years it has been an ideal position for boot repairs and or radio and electrical repairs for locals as both the train and the tram run past the front door.

Another mural which had largely gone under my radar is one of this silhouetted skateboarder performing a trick in mid-flight. It can be found in Burwood Road high on the easterly wall facing Launder Street. F45 Training occupy the first floor of 1/408 Burwood Road at what was once the meeting hall of the Grand United Order of Oddfellows.  This fraternity was established in England in the late 1700s. The first GUOOF opened in Australia in the 1840s and this building was built in 1898/9. The inner suburbs of Melbourne were strongholds for the friendly societies and many local identities were members of the Hawthorn branch. Male members made fortnightly contributions which enabled them to draw upon sickness, unemployment and funerary benefits when required, As many as one in three people were protected by a friendly society in Australia in the 1890s. Heritage Assessment- Burwood Road Precinct 2008. Prepared by john Briggs for the City of Boroondara.

For many years it was known as the Hawthorn Hall. The façade has since had a variety of painted treatments as various commercial enterprises moved in and out. At one time the lower storey was painted bright yellow but now the building has been painted cream with dark brown parapet and window treatment, from its days as Oscar Prouse Auctions in the 1990s. If you look carefully a ghost sign for fresh fruit and vegetables is visible underneath the image, probably from the building’s more recent period as Maruthi Food Store, selling fresh fruits and vegetables and Indian & Middle Eastern groceries.

The street art featured on the southern wall of Tahlo Fashion Design, retail and made to order women’s clothing at 54 Church Street, Hawthorn, is not what you might have expected in Hawthorn, but the captivating work has become a widely recognized feature of this small shopping precinct.

It is the second piece of art commissioned for this site by Isabella Patterson, owner of Frey, a select home furnishings company. Isabella says that the first image was completed around 2015 but when it was updated just 18 months later, it generated a passionate community response, as many feared the loss of this popular icon.

Both murals, however, were created by Danny Awes and based on the work of Mario Gerth’s intimate photography, a collection of portraits which pays homage to Africa and its people. The current work features “Buni” a boy from the Suri tribe in Ethiopia. Recently Frey moved their Furniture Homeware, Interior design and Décor business across the road to 41 Church Street and the owner Isabella, hints that a new mural may well be featured at the new premises.

This building In the 1920s was Miss Katie Harcourt’s fancy goods store and in the 1940s and 1950s it was Miss D Hurford florist, but by 1966 it was Harvard Shower Screen manufacturers.

Many thanks for the information and photographs supplied by the Hawthorn traders and businesses, who take pride in the murals that adorn their establishments or distinguish their neighbourhood and have been excited to learn about the history of their area. Paul Stewart, Joseph Pulvirenti and Peter Selar from the Auburn Village, Ben Folland, Hawthorn Cobblers, Isabella Patterson, Frey Homewares, Sophie from Tahlo Women’s Clothing, and De from Inspire Workforce.  Hopefully in due course we will hear more from our overtures to the artists.