Living in the Heart of Hawthorn 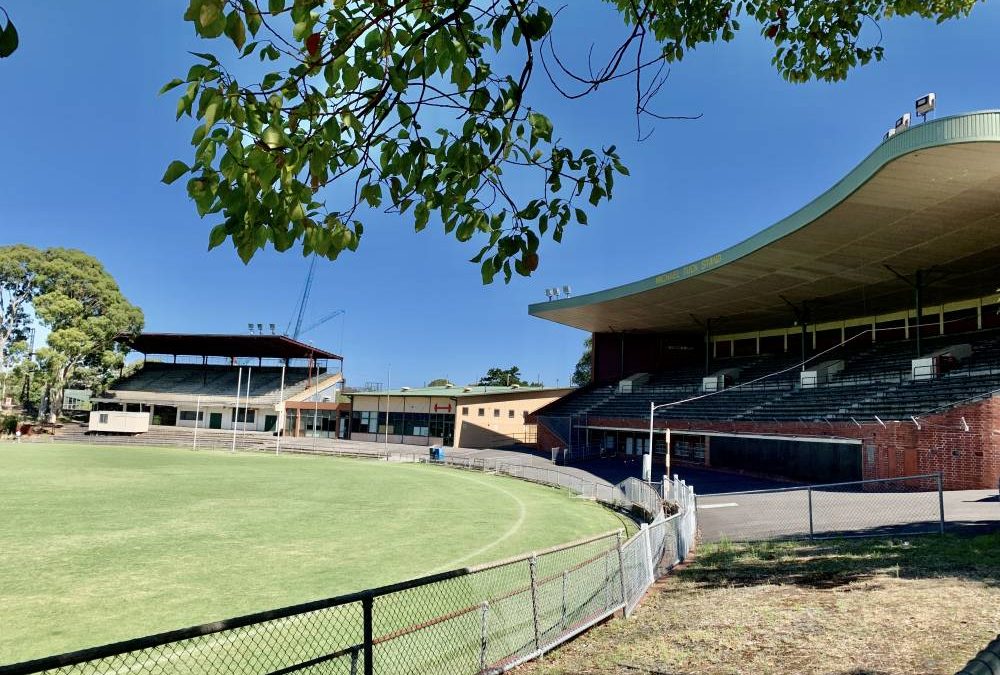 For Hawthorn Football Club supporters during the triumphant years of 1970s and 1980s, living at Glenferrie oval and rubbing shoulders with their heroes Don Scott, Robert Di Pierdomenico, Leigh Matthews and Michael Tuck, just to mention a few, would have been a dream come true. However, it is unlikely that Russell Marshall knew, when he moved to Hawthorn that his new position would indeed become a dream job and that he and his family would embrace and be embraced by the Hawthorn Football Club family. Although the club had not played at Glenferrie oval since August 1973, the ground and the facilities were still used for training, the club administration, family days and by the social club. These were the years of great on-field success for the club and membership was high.

For the first five years of his life, Russell Marshall had lived in Collingwood before moving to Armadale, where his dad ran a butcher’s shop. He attended Armadale State School and being a practical lad, he then attended Caufield Technical School. After leaving school he became a licensed scaffolder but says there were numerous strikes at the time and unfortunately a few too many falls for his liking. He decided after 8 years to swap employment and left the industry to learn the ‘turf trade’ at Caufield City Council. During his time there, he spent most of his working days at Princess Park, Caufield, preparing the pitches for the VJCA (Victorian Junior Cricket Association). A few years later however, he found himself fielding job offers from both the Collingwood and Hawthorn Football Clubs.

Despite following the St Kilda football club as a child, he decided to take the Hawthorn appointment because accommodation for his family in the caretakers’ cottage at Glenferrie Oval, was to be a part of his employment package. Russell, his wife Gail and their sixteen-month-old son Brett moved into the cottage in mid-September 1977, the day Hawthorn Football Club lost a place in the preliminary final to North Melbourne. As the football season had ended there was now a pressing need to prepare the ground for the fast-approaching cricket season.

The next day, was a Sunday and Russell went over to the Glenferrie Oval to have a look. It was

“half grass, half bare dirt …. The centre was a giant square of chopped up mud but hard and the cricket season was to start in 14 days. So, from ‘Day One’ it was full on. With the weather on my side the game went ahead and it received a write up in The Sun. – New Curator Saves the Day. It was one run the difference in a one-day match.”

The Marshall family loved living in the “Heart of Hawthorn” but initially the cottage did have its downside. When the Marshalls moved in, it consisted of just two bedrooms and a bungalow. It was rather dilapidated and having been unoccupied for a short while, a family of field mice had also moved in. The Marshall family could, for the first weeks, hear mice running up and down inside the roof.

Over the years Russell had done painting and repairs to make it comfortable until the cottage was renovated in 1994, when a third bedroom along with an inside toilet and large family room and new kitchen benches and air conditioning were added.

Of course, the look and feel of the Glenferrie Oval has also changed over those years. Russell remembers many of the remnants of the old footy and sporting facilities,

… “the eastern end had a bowling green, the swimming pool was separated from the oval by a fence. There was also a long row of toilets the length of the ground, a ticket box with turnstiles, the Linda Crescent coaches boxes, more turnstiles near the stand and between the stands was a large toilet block I used as a maintenance shed. Beside the railway there was a lot of concrete and steel railings. As the years went by a lot of the things from these older times disappeared, the score board was moved, the coaches’ boxes went too and a new Recreation Centre was built.

The groundsman/caretaker’s cottage was certainly close to all of Hawthorn’s amenities, shops, entertainment, kindergartens and schools, and for Russell it was just an easy stroll to work.  The convenience of this location made for a great family time and their four children. Brett, Jarrod, Luke, and Laura grew up in the area, attended the local Glenferrie Primary and Hawthorn Secondary College and enjoyed the freedom of this unique location.

“Their friends would come in after school to watch training. Their parents didn’t worry – they were just up at the Marshalls. They had a footy field to play on, a park and the grandstands to play in. They even explored the Hawthorn drain system”.

However, this time was not without a period of significant trauma for the family. In May 1989 when Gail was doing duty as a parent-helper at Manresa Kindergarten, she was, along with her two youngest children, caught up in the dramatic siege by an armed gunman at the Kindergarten. She was instrumental in helping nineteen of the children to safety, and later received from the Chief Commissioner of Police a Certificate of Commendation for her bravery.

Using real estate “speak” the cottage was close to transport. The caretaker’s cottage was tucked in behind the Tuck Stand. but was also very close to the rail line. Although situated very close to the train, Russell says the train noise never bothered him as he had always lived near a train and the clatter of trains arriving and departing the busy Glenferrie station, soon became just familiar background sound. The cottage may well have started its life as accommodation for a railway worker or gate keeper overseeing the crossings of the Hawthorn – Kew line, as it cut an arc through the Grace Park estate towards Kew.

This single track line which ran for 2.4km in length was opened in December 1887 but the last train passed through to Kew station (now the site of the Vic Roads building) was in August 1952.

Section of Morgan Street directory from 1938.

The cottage however, was also close to the Hawthorn Rifle Club and the Hawthorn City Band rooms. Russell quipped that the music practice didn’t really bother him either as he just turned up the volume of his own music. Russell and Gail received a number of invitations to band functions and Christmas parties and also recall that the kids “got really excited when the band started to practice the Star Wars theme.”

Every workman needs a faithful companion and this was certainly true for Russell. Sally, the 12-month-old, homeless stray, was a Labrador – Alsatian cross, with a sunny nature. Rescued from death-row she moved in with the family and quickly became very much a part of Russell’s day to day life as curator.  Sally, who slept in a kennel at the front door, worked by Russell’s side every day and accompanied him everywhere. She walked “every lap beside the tractor while I was mowing” and ventured out with him in the evenings to check the sprinklers, under the watchful eye of the local foxes.

Insert image of Russell with Sally

A regular attendee at training and club outdoor events, no sausage sizzle at the Club could begin until Sally had been given her sausage. When she died after a short illness, her passing was mourned by many of the area’s local residents who came to know her well, along with thousands of Hawthorn Football Club fans. Russell eventually decided on a fitting ending for his faithful companion. He had her body cremated and her ashes were sprinkled on the Glenferrie Oval. An article about her featured in the paper and the club’s cheer-squad raised a banner in her honour, an acknowledgement of her contribution to the camaraderie of the club– “A Tribute to Sally – You’ll Always be Part of Hawthorn”. We understand that this innovation was not received well by the AFL.

Russell says the Hawthorn Football Club was a great club to work for. They all felt they were part of the Hawthorn family and made many great friendships with players and staff.

When I asked how it came to pass that he has so many photos of family members holding premiership cups, I was delighted to learn that Russell, who was invited to many social events and grand final after-match celebrations, was often given the cup to take back to Glenferrie to keep it safe overnight.

On another occasion during celebrations, Russell was entrusted with the Brownlow medal which had been won by an (unnamed) Hawthorn player. When Russell later enquired when the player would like his medal back, the player, having no memory of the interaction that night, seemed mightily relieved to discover it was safe and he hadn’t ‘lost’ the medal after all.

Russell worked for the Hawthorn Football Club for 26 years but was no longer required after the club finally moved to Waverley in 2003. The caretaker’s cottage then stood vacant for about ten years and looked rather forlorn and abandoned before finally being demolished about three or four years ago. Insert image of cottage before demolition.

Russell was offered a job at Le Pine by CEO John Fowler, a friend and footy mate.

” During my time at Le Pine, part of my job, required the transfer of the deceased and I had the honour of laying to rest some good Hawthorn people. I’ve thought on many occasions what Hawthorn has meant to a lot of people having been witness to ashes being scattered on the oval.”

“One very sad time, I was on a lunch break at Le Pine. I drove down to show a workmate where I had lived, to find a demolition team ripping the cottage down. Three of my kids were born whilst I was working there. My wife cried when I sent her a photo on my phone.”

Russell has a lingering disappointment that his years of service in the employment of the Hawthorn Football Club were not recognized with a life-membership. Of course, the family have since moved away to the suburb of Narre Warren; the children have become adults and Russell and Gail now have eight grandchildren. Russell however, remains a passionate Hawthorn Football Club supporter and there are many treasured reminders of the club’s proud achievements, adorning the walls of their current home.

“All good things come to an end.

Okay it wasn’t a palace but … it was a dream to live there.”