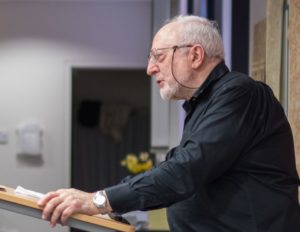 There was a packed house  for our Melbourne Mansions seminar on Saturday 19th August.

We had four excellent speakers, Prof Miles Lewis, Mark Weller, and Maree and Barbara Wilding whose topics complemented each other well.
Prof Lewis spoke about the internal arrangements of 19th Century houses in Melbourne with many interesting examples which demonstrated how they operated and how people managed their lives.
Mark Weller’s talk centred about the renovation and decoration of his Victorian home and traditional techniques used for embellishment.
Maree and Barbara Wilding shared the history of paper hangings in the late 19th and early 20th century and the research which was undertaken to revive their production.
There was good interest in the several displays concerning some important local estates, some of which have been divided up, showing off part of our collection of maps and photographs.