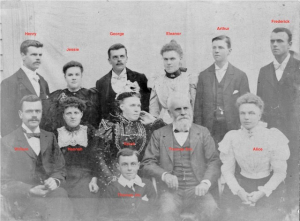 If you live in Boroondara, there’s a good chance your home was built by the Constable family.
Benjamin and Hannah Constable and their five children aged 10 to 1 years of age arrived in Melbourne after 88 days at sea from England on 12th February 1850 to start a new life in Australia. Benjamin worked his way down the south eastern suburbs to Mornington building many houses. His son Thomas was also a builder who moved to New Zealand where he worked, married and had 10 children. They returned to Melbourne where they settled in a house Thomas built at 7 Park Rd Hawthorn. He continued to build houses throughout the area. Thomas’s eldest son William, also a builder, worked with him until Thomas’s death and then continued building houses in Canterbury, Surrey Hills, Mont Albert areas. William’s sons and then William’s grandchildren continued to live and work in the area until after 86 years, in 1974, they moved to Croydon. They still hold a great interest in the area.